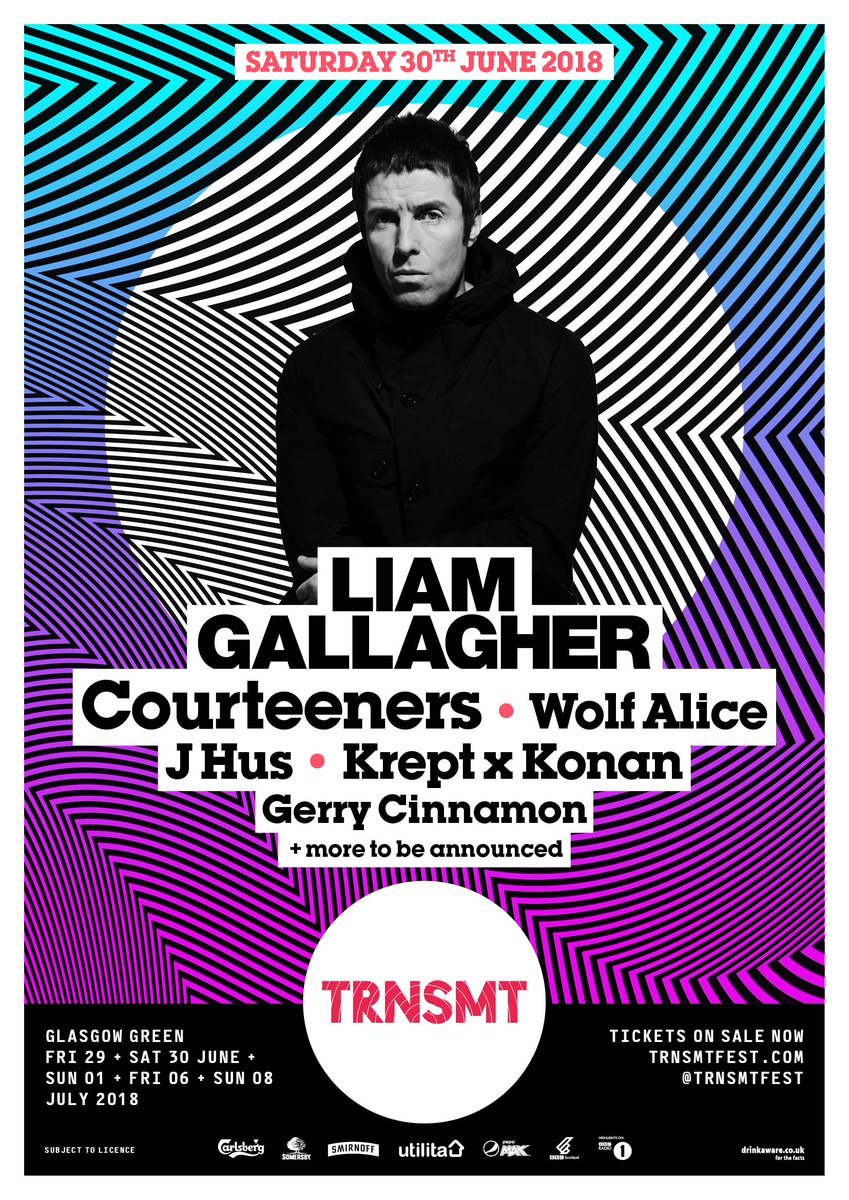 Chasing Rainbows in the Company of Strangers

Martin Donaldson looks back on TRNSMT 2018

As far as music festival experiences go, TRNSMT is one of the more agreeable. Held on Glasgow Green, in the heart of our Dear Green Place, there is no need to dust down your ground sheets, tent poles or sleeping bags. A five or ten-minute walk through the bustling streets of Glasgow lined with bars, restaurants and cafes and you find yourself on the edge of music heaven.

With four main stages to keep music lovers occupied, the choice is all yours for a relaxing unplugged set, groove your day away at the dance area or take up the opportunity to see an up-and-coming band at the King Tut’s stage. Finally, the main stage gives revellers the chance to see a mix of artists and genres on the biggest platform.

I am not saying you are restricted to these areas, the site is laid out with just about everything the young and not-so-young crowd could really need. The charging stations and cocktail bars provide dance tracks to keep the party going when you are away from the stages. You also have plenty of space to just kick back and relax on the slopes of the park and take part in everybody’s favourite pastime of people watching.

In the digital age, the TRNSMT app also gives you a chance to plan your day with the festival app with stage times and reminders, just in case you are having too much fun elsewhere on the site.

A late call-off meant some changes to overall line-up on the Saturday with a starting slot for The LaFontaines on the main stage. The LaFontaines closed the King Tut’s stage the previous year and the energy and delivery of Kerr Okan kicked off a relentless day of music in Glasgow.

Next on the main stage were one of the great early indie bands of the nineties. Shed Seven swaggered on stage and opened with lead track Room in my House from their new album. They then rolled back the years with a set list of hits that left the crowd wanting more. Rick Witter leads Shed Seven from one hit song to the next and my only wish was that they could have played for longer, a real treat in the early afternoon. As fans made their way to the King Tut’s stage, the crowd continued to sing the chorus of Chasing Rainbows along the way. 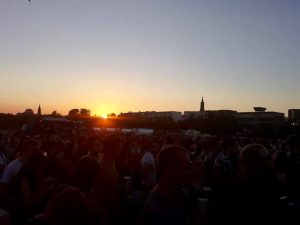 With a huge crowd already in place for the Lothian band The Snuts, they then led the crowd through a seamless set including What’s Going On and the aptly-named Glasgow. A strong set from a brillant band who should be playing bigger stages very soon.

As the afternoon sun grew stronger, it was time to take a break in the shade as Kyle Falconer was welcomed on to the stage at King Tut’s. The frontman from The View brought his full band with him and that unmistakable voice serenaded the fans tucked into the east corner of the green.

Time for a quick walk to the bar to pick up some much needed refreshments before making my way to the main stage for Gerry Cinnamon to treat his “pals”, fellow Glaswegians and new army of fans to a walkthrough of his songbook.

With space at a premium, easily 40,000 people wedged themselves in at the main stage to see Gerry play at his hometown festival, a masterstroke from the organisers who guaranteed the boy from Castlemilk his place in the sun.

As he stood alone dreaming, he certainly wasn’t in the company of strangers. Gerry sang his life story, the crowd joined him in a full-blown party atmosphere where the energy between fans and singer made for a special moment. With fans and singers leading their way through the unsigned artist’s songbook of Belter, Lullaby, Sometimes and Fortune Favours the Bold, finishing with an acoustic version of Discoland leaving everyone on a maximum high.

After his set I took a stroll down by the Clydeside in the shade, with plenty of food stalls to feed your appetite and bars to keep you refreshed, a seat in amongst the trees and a chance to talk to fellow music fans. A great crowd sharing stories of their travels from Canada, Birmingham & Baillieston, all with different idols but all there for a great day out. 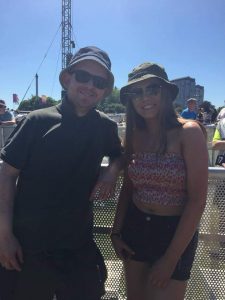 The dance area and cocktail bar are perfect to keep the party going between bands or just to sit and recharge your batteries and phone. Thankfully, the TRNSMT app reminded me The Courteeners were due on stage and I squeezed my way into the front in time to hear Liam Fray lead the Glasgow crowd through their anthems. The crowd, armed with smoke bombs and flares, helped light up an electric set from the English indie-rockers.

Time for a quick toilet break and back in place for the moment I had been waiting for – Liam Gallagher – since I had bought my tickets and I had no intention of missing out.

As show time approached, the fans sang along with The Stone Roses being played in the background, then in a flash Liam Gallagher made his way to the stage. All eyes in Glasgow Green followed him on the big screens as he made his trademark swagger from his dressing room to his stage. With the crowd at fever pitch, he strolled on stage and entered into the Oasis anthem Rock ‘n’ Roll Star. 24 years on from the first time I had heard him sing it at the Glasgow Barrowlands, it was great to hear him hold us all in his hands once again.

Anthem after anthem of Oasis tracks and hits from his As You Were album brought the crowd to a fever pitch. As far as frontmen go, there can’t be many better than Liam Gallagher: swagger, arrogance, style, and he leads the crowd in everything he does.

Whatever made an appearance and faded out thanks to the backing of the old-skool Oasis fans with a rendition of “I’d like to be, under the sea, in an octopus’s garden in the shade.”

Just as the set was in full flow, the music came to an abrupt stop. A fan in the crowd had decided he needed a better vantage point and scaled one of the speaker masts, and for safety reasons the gig was called to a short halt. With bottles, drinks and abuse being thrown at the climber, Liam also gave him a piece of his mind. After a break, Liam had enough of waiting and kicked off the gig again. More flares and smoke bombs went off to Cigarettes & Alcohol, Liam kept the abuse up, directing D’yer Wanna be a Spaceman? to our high flying intruder. 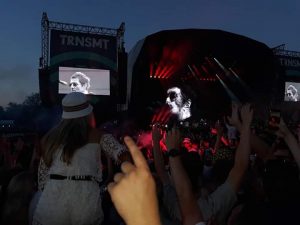 An excellent set and night was finished off with Live Forever and Wonderwall. Fans made their way back to the city to keep the party going, or maybe to get themselves ready for another day at TRNSMT. Either way, Glasgow was brightly shining and waiting to do it all again on the Sunday.

Previous Post
Into Live Music: U2 at O2 Arena, London